“The Société de Médecine Mentale de Belgique (SMMB) was created in the 19th century. This society united the Belgian psychiatrists, made knowledge sharing possible and raised awareness of problems in the Belgian psychiatric world. During the meetings of the society, ideas and opinions of Belgian physicians as well as their foreign colleagues, were exchanged. Until now, research on these transnational contacts, particularly in Belgium, had been very superficial. Yet, the 19th century did not only see the advent of the nation, but also of more and more transnational networks. This article aspires to fill this void by focusing on the international profiling of the SMMB and by studying the impact of foreign alienists on Belgian psychiatry. To gain scientific status in Belgium as well as abroad, the SMMB needed to position itself outside the national borders. Furthermore, the society used its foreign connections to put pressure on the government in an attempt to bring Belgian psychiatry to the same level as in its neighbouring countries. The adaptation of (inter)national ideas and debates was central to its policy and resulted, within the psychiatric community, in tensions between the national and the international level.” 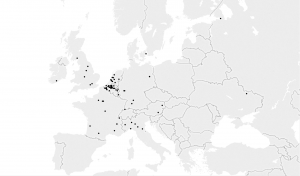