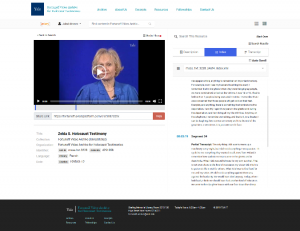 On May 18, I took part in a very interesting workshop held by Jakub Mlynar from the Malach Centre for Visual History at the Faculty of Mathematics and Physics of the Charles University in Prague. This association provides local access to the extensive digital archives of the USC Shoah Foundation – the Institute for Visual history and Education (USC), the Refugee Voices archive of the Association of Jewish Refugees and the testimony collection of the Jewish Holocaust Centre in Melbourne. Nevertheless, the workshop focused on the newly incorporated Fortunoff Video Archive (FVA) that belongs to the category of long-awaited ingestion, and the path to get a licence was more than difficult. The archive represents a new source for all scholars including me, but in this short comment, I would like to critically point out to several minor drawbacks.

Everything began in early 1979, when television producer Laurel Vlock and holocaust survivor Dori Lau launched a project to document the personal memories of Holocaust witnesses on videotaped testimonies. Nowadays, the digitised archive’s collection consists of over 4,400 recordings mapping the destiny and experiences of over 4,000 survivors, bystanders, German soldiers and liberators. All recordings are available for scholars at more than forty partner institutions worldwide, including the CVH Malach in Prague (CZ).

The grassroots initiative was founded to store the first 183 recorded testimonies at the Yale University in 1981, and it established a cooperation with partner locations all over the world by the end of 2015. The entire archive encompasses around 12,000 hours of recorded materials in more than 20 languages and it is a profound source for both scholars and public. Together with the USC, the FVA deposits and carefully captures not only wartime experiences, but also pre-war and postwar affairs in order to provide a complex overview of each individual history.

The archive’s collection consists of over 4,400 testimonies that record the experiences of over 4,000 Holocaust survivors, witnesses, bystanders and liberators. The testimonies are available for research and can be watched at over forty partner locations worldwide, including at the FVA’s office at Yale University. The biggest part of the collection was gathered in Israel and taped in English and the first recordings were taped in the USA at the beginning of 1980s.

Once we compare the FVA with the USC, we observed the biggest difference in the techniques of interviewing and in the length of recordings. Interviewers of the USC interfered sometimes very radically and abruptly into the interviews in contrast to the interviewers from the FVA who rarely intervene in the stories told by a narrator. Thus, the FVA’s interviewing method stresses the leading idea of the witnesses telling their own stories. Questions are primarily used to ascertain time and place, or shed a light on the topics already mentioned, with an emphasis on open-ended questions that give the initiative to the witness. The witnesses are the experts in their own life story, and the interviewers are there to listen, to learn, and to clarify.

Also in terms of length the individual recordings are ranging between 2,5 and 3 hours in case of the USC. On the other hand, the FVA has one exceptional 40-hours recording realised during a month. Despite of these occurrences the FVA also provides very short 20-minutes interviews, for examples with the narrators born in the late 19th century.  These short interviews were recorded in this form because of the capacity of the videotapes they were orginally recorded on.

Researchers may watch testimonies in the partner institutions and it is important to know that the permission to watch them is not the same permission as to publish a part of it. As a courtesy to survivors and their families who allowed to share their stories, the researchers are asked to request a special permission prior to citing testimonies in their works. A licensing agreement is required for any use of audio or video excerpts in film, documentaries or other online media. However, it works very smoothly and applicants do not have to wait long for replies. It is just a good manner to those who provided their memories to create such a unique database. Nevertheless, users have to face several issues. First, they cannot use the full text search to look up people by their names. There is only the first name of each narrator provided and the surname is restricted by data protection regulations and it impedes the searching by names.

Second, the full text search allows you to find entered terms in three sections named general description, index, and transcription, but the outcome of the search is sometimes too broad to find some relevant information and I had to combine it with other metadata and index searching. For example, it is very difficult to find narrators born in Luxembourg since there is no birthplace option, and the index tree is very convoluted and unclear. When watching an interview, you must be ready to change manually the video track after 20-30 minutes. It often ends up in the middle of the speech and does not automatically move to another. Moreover, the index searching is not linked to the whole recording, but to the specific section of the tape. It means you cannot look up a specific term in the whole recording, but only in the part, you are watching.

The FVA consults a variety of Holocaust-related organisations, including the United States Holocaust Memorial Museum, the Museum of Jewish Heritage: A Living Memorial to the Holocaust, the Bergen Belsen Memorial and Museum, and the Memorial to the Murdered Jews of Europe in Berlin. The archive has also worked with organisations concerned with documenting genocides in Armenia, Bosnia, and Cambodia, and with Japanese-Americans that were interned in the United States during World War II.

In addition, the archive sets up new collaborations with institutions focused on the European Holocaust and its director Stephen Naron sets out to launch a number of workshops all over the world. He is also responsible for spearheading initiatives such as digital preservation of the collection and a modern access system for the archive’s materials. Naron works within the wider research community to share access to the FVA’s collection through the partner location programme and online consortia programmes, as well as presenting at conferences, symposiums and sessions of Yale University classes.