“Jewish scouting is a phenomenon that has not been properly investigated, even though Czechoslovak and French Jewish scouts used to work on hundred places in Czechoslovakia and France. Despite this fact, we know very little about their membership, structure and roles. Besides the usual scout program, Jewish organizations in Czechoslovakia had something unique — Zionist education as a prerequisite for resettling their members in Palestine. This sociological phenomenon should be significantly paid attention, since first in history; scouting was seen as a wider base eligible to organize non-educational goals. Czechoslovak Jewish Scouting was in charge of preparing a young Jews to leave for Israel. On the other hand, Jewish French Scouts understood scouting as an organization, which enhanced an identification with the international Scout Movement. French Scout leaders did not undermine Jewish identity, but calls for stronger integration with the French nation. These tendencies were particularly evident in the French colonies (Oran and Tunis), where scouting largely replaced French civic education. Zionist ideas came out later together with Jewish immigrants from Eastern Europe. Until that time, the French scouts had been guided by the slogan “Servir le judaisme et la France!” (I serve Judaism and France). The paper aims to illustrate the distinctions in the concept of Jewish scouting in France and Czechoslovakia. It concisely describes the activities of the Jewish Scout groups during World War II. In addition, the study reflects the rebuilding of Jewish Scouting after the war, especially the relationship of surviving Jewish scouts to their former homelands.” 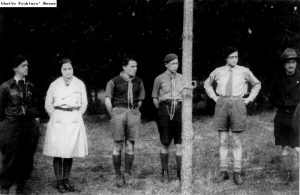