The first week of July saw talks about reconciling two seemingly opposite approaches to scientific inquiry: historical studies and complex systems science. On the 4th of July Iza Romanowska from Barcelona Supercomputing Center and Tom Brughmans from University of Barcelona gave a joint introductory lecture “Agent-based modelling and network science for the study of the human past”. Together with the previous day lecture from Leif Scheuermann those two DTU lectures formed a two days event dedicated to simulation models and history. 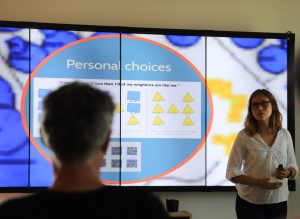 Both Iza Romanowska and Tom Brughmans are active champions of implementing methods developed complex systems science in archaeology. Iza Romanowska has been focusing on using Agent based modelling (ABM) and simulations in general (see the Simulating Complexity blog) as a tool to explain archaeological record and has worked on material of early hominid dispersal and processes in Roman economy. Tom Brughmans has been introducing mathematical graph theory based network analysis to archaeology. He is involved in a multitude of archaeology projects (currently Project Mercury) specialising on network analysis of material of the projects and has brought together researchers interested in the topic with the conference series “Connected Past”  among other events (see Archaeological Networks blog).

The lecture was divided into three distinct parts. The first part was an introduction to general principles of modelling and simulation in general and described the main ideas behind ABM simulations. The discipline of history as a representative of humanities is not much occupied with formalizing structures of it’s knowledge production, so introducing the concepts of models is crucial for building an understanding of the domain.

Iza Romanowska introduced models as simplified presentations of reality created to fulfill a specific goal. She described the principles of simulations as models with time dimension and specifics of ABM as being composed of an amount of agents and rules determining their actions and environment. As an example she explained seminal Schelling segregation model, which gave new significant insights into the process of urban population segregation.

In the next section of the lecture she gave an example of an ABM which was used to test several hypotheses of why a town in the Middle-East has only local pottery, although there is a lot of diversity in the surrounding areas. To approach the problem a model was created with different behavioural patterns leading to pottery use and Approximate Bayesian Computation (ABC) was used to measure the full parameter-space of simulation results. The simulation results demonstrated that simplified explanations through single behavioural causes would not have created the observed patterns. The simulation thus refuted the possibility of several hypotheses raised by archaeologists.

In the third part of the lecture Tom Brughmans introduced network science as used in archaeology to explore relations between findings in material culture. As most of those studies use networks in combination with geographical data and thus inheriting spatial dimension. Such approach was illustrated by his ongoing study of Himalayan hillforts. The goal of the study is to test the hypothesis of the hillforts forming a signalling system meant to alert in case of external threats. A network of inter-visible hillforts was constructed and compared to geographically plausible random networks and it was concluded that the hillfort network had been better suitable for signalling than random networks.

The examples illustrated the perspectives to history which can be approached by methods from complexity science – those which have systems of large amount of agents or networks of some sort.

The lecture was followed by lively question rounds about specifics of modelling and case studies. The discussion continued on at the FLSHASE Annual Faculty Grill Party.

Some resources on the topic: